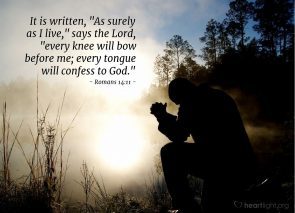 1 A few days later, when Jesus again entered Capernaum, the people heard that He had come home. 2 They gathered in such large numbers that there was no room left, not even outside the door, and He preached the word to them. 3 Some men came, bringing to Him a paralyzed man, carried by four of them. 4 Since they could not get him to Jesus because of the crowd, they made an opening in the roof above Jesus by digging through it and then lowered the mat the man was lying on. 5 When Jesus saw their faith, He said to the paralyzed man, “Son, your sins are forgiven.”

6 Now some teachers of the law were sitting there, thinking to themselves, 7 “Why does this fellow talk like that? He’s blaspheming! Who can forgive sins but God alone?” 8 Immediately Jesus knew in His spirit that this was what they were thinking in their hearts, and He said to them, “Why are you thinking these things? 9 Which is easier: to say to this paralyzed man, ‘Your sins are forgiven,’ or to say, ‘Get up, take your mat and walk’? 10 But I want you to know that the Son of Man has authority on earth to forgive sins.” So he said to the man, 11 “I tell you, get up, take your mat and go home.” 12 He got up, took his mat and walked out in full view of them all. This amazed everyone and they praised God, saying, “We have never seen anything like this!” (Mark 2:1-12)

There is always a way to reach the Lord. He is never inaccessible to us, even though throngs of people want His attention, seek His guidance, ask for His help, or need His comfort.

The extent of our faith is our entrance to find the Lord and bring our needs to Him. When the men didn’t give up after seeing the crowds and were determined to bring the paralyzed man to Jesus, He visibly saw their faith. Persistence and action were the evidence of their faith. How can we/how do we show faith to the Lord, so He can truly witness our faith in Him?

We must believe in the power of Jesus. The four men who brought the paralyzed man to Jesus did not stop to discuss, question, or evaluate rationally if this attempt was impossible or futile. They made an opening to Jesus, whom they fully believed could heal the man.

Trust fully that Jesus is the Son of God in our thoughts, in our hearts. He asks the teachers of the law: “Why are you thinking these things? 9 Which is easier: to say to this paralyzed man, ‘Your sins are forgiven,’ or to say, ‘Get up, take your mat and walk’?  10 But I want you to know that the Son of Man has authority on earth to forgive sins.”  Jesus knows our thoughts. We might speak and act like we have faith, but our thoughts and our hearts will betray us if we are questioning His authority. In this case, the teachers of the law spoke and acted according to their thoughts, revealing their arrogance in their own authority and a lack of belief in Christ who would supersede their authority IF He was, indeed, the Son of God.

Obey the Words of Jesus. 11 “ ‘ I tell you, get up, take your mat and go home.’ 12 He got up, took his mat and walked out in full view of them all.” The paralyzed man did not question this command. He did not say, “But I can’t. It’s impossible. I have been paralyzed for years. No man can just speak the words and make this happen.” Instead of questioning, the man simply obeyed. And he was healed.

Be in absolute awe of the Lord. 12This amazed everyone and they praised God, saying, “We have never seen anything like this!” Can we look at the buds sprouting into leaves on the trees in spring and not be in awe? Are we amazed when the colors splash across those same leaves in the fall? Do we think of the intricacy of creation in the human body as we gaze upon a newborn child? Can we see the miracles every day with awe that all this is from the Lord who has amazing power and authority over all creation.

10 “You are My witnesses,” declares the Lord, and My servant whom I have chosen, so that you may know and believe Me and understand that I am He. Before Me no god was formed, nor will there be one after Me.11 I, even I, am the Lord, and apart from me there is no savior. 12 I have revealed and saved and proclaimed- I, and not some foreign god among you. You are My witnesses,” declares the Lord, “that I am God. 13 Yes, and from ancient days I am He. No one can deliver out of My hand.  When I act, who can reverse it?” (Isaiah 43:10-13)

WE ARE HIS WITNESSES.