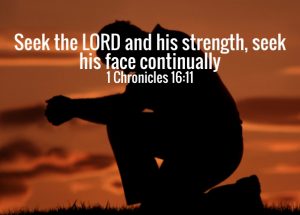 29 As Jesus and His disciples were leaving Jericho, a large crowd followed Him. 30 Two blind men were sitting by the roadside, and when they heard that Jesus was going by, they shouted, “Lord, Son of David, have mercy on us!” 31 The crowd rebuked them and told them to be quiet, but they shouted all the louder, “Lord, Son of David, have mercy on us!” 32 Jesus stopped and called them. “What do you want Me to do for you?” He asked.33 “Lord,” they answered, “we want our sight.” 34 Jesus had compassion on them and touched their eyes. Immediately they received their sight and followed Him. (Matthew 20:29-34)

In a recent eye exam, I was given the usual sight test to determine my visual acuity. After shielding my left eye with an eye patch, I was asked to read the letters on the screen. Straining to attempt to see something I could recognize, she enlarged the letters. Still straining to identify even one letter, I had to admit to her that I could not see anything clearly enough for identification. She, then, moved the patch to the right eye. I could see every line for 20/20 vision in my left eye. I don’t know what it’s like to be blind, but even the reduction of sight in one eye is concerning. It results in a new appreciation of the God-given gift of our eyes.

Having total loss of sight resulted in two blind men shouting to Jesus, “Lord, Son of David, have mercy on us!” They knew His lineage; they knew His power; they asked for His mercy. They boldly stated their request for sight, knowing He could give that to them. And Jesus responded with compassion, touching their eyes. There was no time lapse in healing. Sight was immediate!

The touch of the Savior. He is always within our sight. But can we see His presence in our lives? Are we aware of His power as the blind men were who could not see?

Blindness can be more than a physical impairment. It can be the absence of a caring heart toward others. It can be a severe lack of understanding, becoming blinded by untruth, false beliefs and teachings and opinions of men or women. Our sight is dimmed. The Light is gone, so we become the blind in a world that desperately needs the vision of the cross and the sight of the Savior—yet does not see.

Once the blind men had been given the gift of sight, they saw what they must do—and followed Jesus. It is what we must do to truly see the path in this life that leads us to an eternal home with the Lord.

The touch of the Savior. The compassion in His eyes as He looks at us. Will we see? Will we ask to see? Will we be healed from His touch, because we believe that His Light will dispel our blindness? Will we follow Him?

Look to the Lord and His strength;
seek His face always. (I Chronicles 16:11)