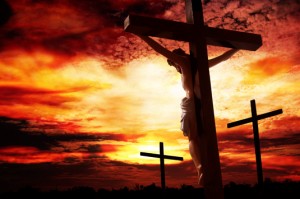 23 When they hurled their insults at Him, He did not retaliate; when He suffered, He made no threats. Instead, He entrusted Himself to Him who judges justly. 24 “He himself bore our sins” in His body on the cross, so that we might die to sins and live for righteousness; “by His wounds you have been healed.” 25 For “you were like sheep going astray,” but now you have returned to the Shepherd and Overseer of your souls. (I Peter 2:23-25)

Eternal life from one death.

Not mine. Not yours. But His.

One man on the cross.

The only begotten Son.

He who had known life with the Father chose to trust God to be the Judge of others who insulted Him, who tortured Him.  The Son did not seek vengeance. Instead, He asked His Father to forgive–

He who had known life with the Father chose death, not a peaceful in-your-sleep slumber from which one does not awaken but a violent death of intense external and internal suffering and anguish–