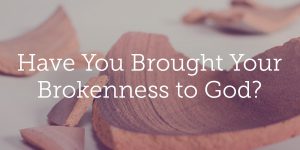 The Lord is close to the brokenhearted 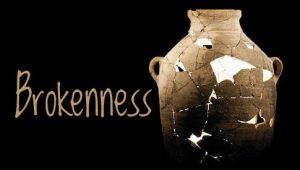 The boy waited in anxious anticipation, fear, and shame for his mother to come home. When he finally heard the key turn in the lock, he carefully lifted the makeshift object, sighed loudly, and brought it to his mother. Head drooped, he held it out to her. The mother looked intently at her son, reached for the poorly glued shape, carefully inspected it, and then walked over to the stand where the vase had always been, placing it on her mother’s beautiful handmade doily. The boy watched this scene with confusion and fear, still expecting some form of punishment from his careless act of playing too rough near the vase.

But the mother saw his contrite heart, held him close, and led him to the vase. She said the vase was more beautiful with the scars. “It is brokenness,” she said, “that unites us all, from great-grandma to grandma, to me, and now to you. The pieces of our lives may shatter around us, but we get on our knees before God who helps us glue the broken edges back together to allow us to continue on in this life through our mistakes. Although the scars still show, we can be whole through the One who had scars in His hands, feet, side, and body. His brokenness allows us all to be whole inside while carrying with us the scars of this life.” Gently touching his shoulder, she left him alone by the vase.

The boy knew his mother was speaking of Jesus. She had taken him to Bible class and worship every Sunday. He wondered if everyone at church was BROKEN with SCARS. He reached out to touch the sides of the vase. It was rough but holding together in a new form, fragile and in need of a better potter than he had been. He walked away, pondering these things in his heart.

The jagged edges and visible breaks in our lives remind us that we can never be the Potter who makes the clay into the vessel of a perfect, seamless creation.